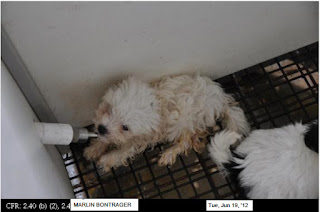 In a campaign against what she call puppy mills, Pam Sordyl said more localized inspections are needed for dog breeding kennels.

Sordyl is the founder and leader of Puppy Mill Awareness of Southeast Michigan. The group has raised complaints about breeding kennels in northeast Indiana.

Sordyl also believes that county animal health inspectors are needed. Noble County has no local person in that role, she said.

A majority of people who care about their pets would not consider keeping them only to meet the minimum USDA standards, said Lori Gagen, executive director of Black Pine Animal Sanctuary in Albion

“Most people desire and strive (knowingly or not) to far exceed those minimum standards when keeping man’s best friend, and others,” she said. Gagen compared the conditions in kennels that barely meet USDA standards to a prison.

Sordyl also expressed concern about dogs being kept in cages their whole lives and animals with dental diseases or eye problems. “Puppy mills” often don’t provide care for the illnesses and medical conditions some breeds develop, she said.

An Amish dog breeding kennel owner in LaGrange County, who requested anonymity because he fears harassment, said he focuses on only a couple of breeds to make sure he can address both those concerns and those of breeding organizations.

“I feel that if I specifically breed certain breeds, I can focus more on breed standards,” he said. All of his dogs are American Kennel Club-registered, and they are certified by the Orthopedic Foundation for Animals Inc. for heart and knee health. Any dogs with health issues are adopted directly to homeowners as pets, he said.

Sordyl said the USDA is cracking down “a bit more” in the last few years. More direct violations are being cited, and more kennel owners are having licenses revoked, she said.

Black Pine Animal Sanctuary has proposed creating a task force to review Noble County’s ordinances related to the keeping of animals and dog kennels, to make recommendations to address the types of concerns mentioned, Gagen said.

“We hope to have recommendations to present this summer and plan to adhere to the appropriate procedures in place to submit our recommendations for consideration,” Gagen said.

The problem, said USDA spokesman David Sacks and kennel owners, is people who don’t follow the rules and give all other kennel owners a bad reputation, which they say is undeserved.

The first anonymous kennel owner said he is frustrated by what he called substandard kennels, which he said he opposes as much as anyone else.

“We have done a lot of work to get those people to come up to standards or get out of the business,” he said.

Kennel owners’ groups have set up a kennel management assistance program for breeders who want to get started or work to improve what they do. That program doesn’t benefit those leading it, except that getting people on the program betters the industry, he said.

The problem is that other owners can’t tell someone what they must do, he said.

“We’ve taken steps to do everything in our power to eliminate those bad kennels,” he said. The percentage of them is lower, but they’re still there, he added.

Sacks disagreed with using the term “substandard kennel,” but he said the problem is that bad kennels profiled on television programs have provoked strong reactions.

The first kennel owner said he asked for anonymity because he knows of threats made against others simply for operating kennels. He said he didn’t want to risk harm to himself or his family by having his name publicized.

He also said he is aware of threats against kennel owners in Noble County after news coverage of a January meeting of the Noble County Board of Zoning Appeals, at which Sordyl, Gagen and others sought to block zoning variances for six kennels.

Sordyl confirmed that kennel owners in Noble County were threatened. “I think that’s unfortunate,” she said.

Some people who got involved after news coverage of the meeting decided they should take the approach of threats as a way to help the animals, Sordyl said. They even had a Facebook page up until Gagen told them to stop, Sordyl said.

“I do not condone anyone making or carrying out personal threats,” Gagen said. “Anything less than respectful discussion and fact-finding is pointless and only diminishes the credibility of a real effort to help.

“Raising awareness so people can make informed decisions is key. I believe people have their hearts in the right place,” Gagen said. “They do, however, get very emotional and feel helpless, and lash out.

“Many of us donate time, money, and support an overall effort to teach humane treatment of animals to our children, to value life, and to ensure that every animal receives some reasonable definition of quality of life. I support those intentions,” Gagen said.

“They tried to make a difference in their own way,” Sordyl said about those who made threats. “I think that’s a bad approach,” as well as ineffective, she added.

The Amish kennel owner said he is concerned that the majority of kennel owners, Amish or not, who are not part of the problem are getting lumped in with others and getting targeted as a result.

“They’re putting everybody on the same level,” he said.

Mr. Bradley, Thank you for another story on this issue. We need to keep talking about commercial breeding and what can be done to end animal neglect and suffering. My organization does not want breeders to get better at “puppy farming”, we want to end commercial breeding as an ‘industry’. When ever animals are used for profits, it is never good for the animal as money always comes first. If they were properly vetting their animals, there would be no profits.

Clarification: This article states that I confirmed threats were made to breeders in Noble County. I was not aware of any threats. I agree that often when stories make the news and the general public is alerted, some people feel like writing letters to the breeders directly. I disagree with sending letters to a breeders personal residence or calling directly. If someone has a problem with a breeder, they need to reach out to local law enforcement or their commissions, mayor…etc.

The photo used for this article showing a white puppywas taken on June-19-2012 by a USDA inspector. The report reads as follows: Veterinary Care Direct USDA Violation - "There is one puppy, a malti-poo with ID # 2-150 that was found weak. The owner said the puppy was hypoglycemic. The veterinarian had not been contacted. There was no care plan to manage the illness in this puppy. Appropriate care for all sick animals should include complete diagnosis and compliance with veterinary care plan as developed by the veterinarian." Breeder: Marlin Bontrager, Rome City, IN
Posted by Pam Sordyl at 11:40 AM