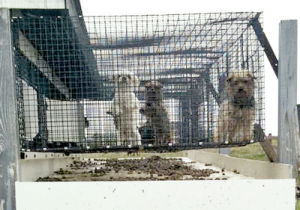 I am posting this article from a northeast Indiana newspaper (News Sun) that covers four counties. I posted Part 2 Inspections called key to preventing puppy mills, yesterday. The reporter used one of our undercover photos from a breeder that supplies The Family Puppy. The store continued to use this breeder after our exposure. I added my comments to the article below. 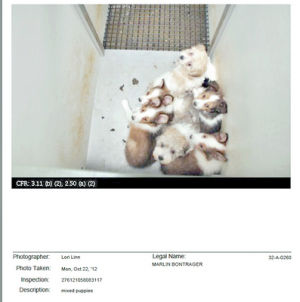 A mix of puppies are together in one kennel in Noble County in this photo taken during a USDA inspection. USDA inspections, how thorough they are and their enforcement are among the issues raised by groups opposed to kennels.

LAGRANGE — Animal rights advocates have labeled Indiana a puppy mill state, with the number of breeding kennels in Indiana growing.

Nearly 20 percent of Indiana’s dog breeding kennels licensed by the U.S. Department of Agriculture are in northeast Indiana, and some have been targeted by groups seeking to block the sale of puppies from them and/or shut them down.

Amish families own and operate most of the local kennels. They view doing so as part of their way of life, and they say they treat their animals well, for both practical reasons and reasons of faith.

Conflicts are arising between people working to protect animals from bad living conditions and others who say the activists are targeting the wrong people. Also in the mix are concerns about selling dogs from breeders and USDA inspections.

Some dog breeders have received threats of harm to themselves and their families.

Emotions are spilling over on all sides, said David Sacks, a USDA spokesman. “Passions run high when you talk about animals. There’s no neutral ground,” he said.

The USDA has licensed 122 dog breeding kennels in Indiana, according to its records. Of those, 23 are in the four northeast corner counties — 18 in LaGrange County, three in Noble County and two in DeKalb County, with none in Steuben County, the USDA said.

Pam Sordyl, who sat on the press board of a national group, the Puppy Mill Project, is the founder and leader of Puppy Mill Awareness of Southeast Michigan.

Sordyl and others have been tracking the number of kennels breeding dogs for commercial sale in each state across the nation and have seen a trend.

“The numbers are going down every year in every state except Indiana,” she said.

The recession and slow economic recovery are one reason for the drop, Sordyl said, adding, “It’s an industry that’s related to the economy.” She also said awareness of what she calls “puppy mills” increased after a 2008 Oprah Winfrey episode on the subject.

What are puppy mills?

But what constitutes a “puppy mill?” It’s a term coined in that Winfrey show, and it has no set meaning — but those who use it usually oppose large breeding kennels or selling dogs across state lines.

That’s not a term we use here at USDA,” Sacks said. It’s used by people opposed to kennels.

"I consider a ‘puppy mill’ any commercial dog breeder that puts a higher priority on making a profit than on providing a good quality of life to the animals they breed, whether they are compliant with the legal definitions of welfare standards or not,” said Lori Gagen of Albion, who is working with groups opposed to commercial breeders in Noble County.

“While ‘quality of life’ is subjective, there are certain basic emotional, social and health-related needs that are typically not met in commercial dog kennels,” said Gagen, the executive director of Black Pine Animal Sanctuary in Albion. “Private dog owners who occasionally breed their pets are not, in my mind, puppy mills.’”

There’s no legal definition for the term, Sordyl said. She defines a puppy mill as, first, a kennel that is profit-driven. Puppy mills also involve minimal veterinary care and settings that aren’t healthy environments for animals, producing puppy after puppy, she added.

That’s what an Amish dog breeding kennel owner in LaGrange County said he and others like him do, partly out of practicality and partly as a matter of faith.

The kennel owner, who asked that his name be withheld because breeders whose names have appeared in print have been targeted by opposition groups, said he has a veterinarian who is hands-on and on-site who inspects the animals.

All the dogs are on a strict vaccination and preventative worming protocol, the kennel owner said. As per Indiana law, they also all have current rabies shots.

His dogs have indoor and outdoor access in their kennels at all times, except when a mother has tiny puppies, the kennel owner said. The restriction then is to protect puppies from the elements.

The kennel building has fans for warm weather and is heated in winter, the kennel owner said. The kennels are 3 feet wide by 12-13 feet long and normally house two dogs each.

There’s also a grassy area outside the kennel of about 30-50 feet where the dogs who don’t have small puppies get one to three hours per day to exercise and socialize, depending on the weather, he said, adding, “They’re friendly.”

Many of the kennels in Indiana — and almost all in northeast Indiana — are owned by Amish families.

Areas with large Amish populations across the state, including LaGrange and Noble counties, are seeing increases in breeding kennels, and are where most of Indiana’s increase in kennels is coming from, Sordyl said.

It has to do with the Amish way of life, Sordyl said. They form businesses, stay close at home, run out of farmland and need to find new trades. For them, the dogs are livestock, she said, adding, “It’s a puppy farm.”

But those statements don’t match with how the Amish actually operate, the kennel owner said.

“You don’t abuse anything,” the kennel owner said. “They should be treated properly.”

The Amish treat all animals with care because of the benefit they provide, whether that is work, such as with horses, profit from farm animals or companionship and love from pets, the kennel owner said.

“Why should we treat a dog different than we treat anything else? Why would we not take care of something that’s going to be beneficial to us?” he asked.

The Amish use the kennels to provide chores for children and something beneficial to do while at home with their families, the kennel owner said, adding, “We like our dogs.”

He originally had pets just for his family and allowed his own dogs to have puppies, he said.

“Demand for the puppies got higher and higher, and I couldn’t keep enough of them around,” he said. That’s when he started selling the dogs commercially.

While selling the dogs the Amish breed generates money, maintaining the kennels and caring for the dogs limits it, the kennel owner said.

“We don’t get rich on dog breeding,” he said.

One Amish kennel owner in Noble County has put more than $100,000 into his kennel facilities, the LaGrange County kennel owner said.

Ultimately, the issue is standards — whether they’re met, and whether they’re high enough.
The USDA’s task is to ensure that animals are getting proper nutrition, that caging is large enough and structurally sound, that animals have adequate veterinary care and that there is enough staff to care for the animals, Sacks said.

The only way to monitor that is through unannounced site inspections, Sacks said.

“Our mission is to make sure the animals get the care they need,” he said.

“Not everything that gets cited results in a penalty action. Some things get fixed on the spot,” he said. “Penalties are not a knee-jerk reaction.”
The type of violation is the first consideration in whether a penalty is issued, Sacks said. Violations that present immediate threats to the welfare of animals — such as having no fresh water — will result in some form of penalty, he said.

Penalties range from warning letters to fines, a temporary suspension of a breeding license or permanently revoking that license, Sacks said.

In looking at prior history, inspectors can tell if there’s a pattern of negligence that merits a penalty or if the kennel just has a problem that day, Sacks said. That’s taken into consideration.

The kennel owner who asked for anonymity said his family raised dairy cattle that produced Grade A milk when he was growing up, so he’s used to working with the USDA to meet standards.

No one will get a perfect inspection every time, the kennel owner said.

Another LaGrange County kennel owner said he had a violation listed on a report that he was told to fix within 24 hours. He said he did so.

But some watchdog groups have asked why the USDA didn’t follow up the next day. That owner, and three others in Noble and LaGrange counties, are on a watchdog group’s list of owners with questions about USDA inspections and follow-ups.

Sacks didn’t have information on specific cases. But many of the violations to which watchdog groups refer are those that are relatively small and might happen in any spot inspection, he said.

I am not sure I understand the difference between a “pet” and a “breeding dog”. The Amish say they love their pets and some are part of their family. Why would they allow one to live in the home with comfort, attention and love, while the rest live in isolation in a barn with only a number?

They say the dogs have access to the outdoors. This simply means they can push thru a door flap onto wire floors and hover over their own feces and urine to look out at a privacy fence or burn under the sun on a hot day. We have recordings from the Noble Cty Zoning meeting stating that the dogs DO NOT go outside in the fenced in open area. If they did, I am guessing the neighbors would hear the barking. Not one site inspection (USDA, Zoning or Police) did they note animals were outside at the Bontrager Kennel. If theses 177 dogs were getting exercise, the owners would need to rotate animals as not all 177 could be allowed to go out at the same time. Unaltered animals need to be separated, correct? You can’t have different breeds mingling with each other, correct? Oh, wait, yes commercial breeders are mixing breeds. Then they call them designer and charge more.

The photo used in this article was taken by a local advocate in Indiana at Roy Schlabach’s kennel in Lagrange County (not a USDA Photo). Schlabach sells puppies to The Family Puppy in the Detroit area. This is typical Amish style kennel. Would you want your family pet living in this kennel? Wire floors are very painful and cause the animals feet to spread out and sometimes blister. We have 8,000 USDA photos taken over the last few years and many show dogs trapped with their feet dangling. They can brake their legs of be trapped without access to food or water.
Posted by Pam Sordyl at 5:51 AM