The market is not taking care of puppy stores, unsafe places 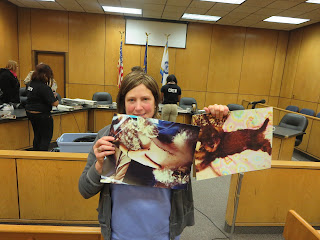 Kim Miles takes Mt. Clemens store to court after purchasing
a puppy will liver shunts. She will live the rest of her life on a special diet and twice-a-day
medication to keep her liver soft so she can absorb the proper nutrients.
The owner is still selling puppies.

As Senator Hune prepares the agenda for the Senate Agriculture Committee meeting tomorrow, animal welfare organizations have already submitted testimony opposing HB 5916/HB 5917 and will be attending the hearing to educate lawmakers about the cruel puppy trade and its impact on communities. My testimony below outlines why these bills will protect puppy mills and leave Michigan a "buyer beware" state.

As Founder of Puppy Mill Awareness of SE Michigan and Michigan Friends of Companion Animals, I have spoken with hundreds of families who have purchased sick puppies from Michigan pet stores and were left with thousands of dollars in veterinary bills. The market is not taking care of the worst actors, nor is local law enforcement. Pet stores are not a safe place to purchase puppies and HB 5916 does not offer enforceable solutions to protect families and pets.

The bills would not require pet store licensing or inspections. Michigan pet stores are not currently licensed or inspected by any agency. We have approximately 15 stores that sell puppies where families cannot easily see the conditions or meet the parents - site unseen purchases. Complainants who call local law enforcement are either told their complaint is a civil matter or pet shops are under the jurisdiction of the Michigan Department of Agriculture. The MDARD dropped the Pet Shop Program (1) ten years ago directing them back to local agencies.
The bills lack meaningful standards and are unenforceable. On the surface, they masquerade as animal welfare, pledging to protect puppies by guaranteeing that they are purchased from “qualified breeders” that are “USDA licensed with not more than three inspection violations in the last year and no direct violations in the last two years.” This means, pet store can still source from large-scale dog kennels with violations to the Animal Welfare Act. Even if Michigan pet stores fully disclose breeder names and addresses, the USDA inspection reports for commercial kennels are blacked out – entirely redacted (2). Consumers would be relying on the pet stores to provide those records.

The bills rely entirely on the USDA’s minimal standards and enforcement which has plummeted this year. The USDA standards are minimal and considered “survival standards” (3). According to a Washington Post article (4) published just this October, we learned the USDA has “revamped” their enforcement process moving away from penalties. Commercial dog breeders have no incentive to provide humane care.

“The department had issued 39 warnings in the first three-quarters of fiscal 2018, and it filed and simultaneously settled one complaint — with a $2,000 fine for an infamous Iowa dog breeder who had already been out of business for five years.
In August, USDA issued no warnings, filed no complaints and imposed no penalties through settlements with any of the 8,000 or so facilities it licenses and inspects under the federal Animal Welfare Act, …. “ per the Washington Post.

These bills would not ensure puppies are provided adequate veterinary care while on display for sale and families visiting the store are protected from Campylobacter. Veterinary clinics hired by the pet stores to sign off on the 30-day health certificates are the same clinics offering free visits after purchase creating a conflict of interest. There are now three lawsuits against Petland Novi (5, 6, 7, 8, 9) just this year including twenty-four plaintiffs all seeking monetary damages for breach of contract and multiple violations of the Consumer Protection Act. The puppies suffered from a range of issues, including genetic defects, infections and some had highly contagious diseases, costing the plaintiffs thousands of dollars in veterinary care. The lawsuits also allege fraud, claiming the store and its owner knowingly sold animals with deformities and illnesses, as well as, misrepresenting the origins of the animals.

One man was man hospitalized after purchasing a puppy infected with Campylobacter at the Petland store in Novi (5). This is currently being investigated by the Better Business Bureau who has been logging other sick animal complaints at the store.

On the other side of the state, six puppy buyers are also seeking legal advice after purchasing ill animals this year at Michigan’s newest pet store, The Barking Boutique (Grandville, MI) (10) 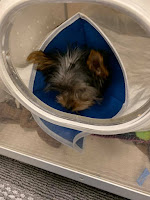 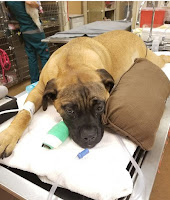 In 2015, over 30 plaintiffs filed multiple lawsuits after purchasing sick puppies at the Gibraltar Trade Center. The owner of Pollywood Pets / Little Dogz continues to sell sick puppies online as criminal charges were not filed (11).

The owner of Michigan’s largest puppy store chain, The Family Puppy, testified at the May 2018 House Agriculture Committee meeting “he was not aware of any complaints”, yet we know this is not true.  I was recently contacted by Toni Kastanos who set up a GoFundMe page (12) in an attempt to cover over 7,000 in veterinary costs after purchasing an anemic puppy from the store’s Novi location. This is not the only complaint my organization has received. NBC 25 covered a story about a puppy that was purchased from the store with many health problems (13).

The bills would not prevent puppies with genetic abnormalities from being sold. The industry has set up what we are calling “showcase” breeders who have new kennels or upgraded kennels, but still lack oversight. There are only a handful of these kennels that are used in marketing packages, while the stores actually source from hundreds of other kennels. Even these “showcase” kennels are sending puppies to our Michigan stores with abnormalities. The Barking Boutique (Grandville, MI) has been regularly shipping puppies with genetic abnormalities listed on the Certificate of Veterinary Inspection records (14).

The bills would not ensure puppies are properly vaccinated. The only regulatory oversight the state provides regarding pet stores is to ensure animals are properly vaccinated during importation. Last year the state conducted two investigations (15) related to missing vaccinations impacting over 110 puppies at The Barking Boutique (Grandville MI), yet the store continued to import animals throughout the year without proper vaccinations even after an official warning letter was sent by the state. Some of those puppies with missing vaccinations were also sold will illnesses.

The bills would not prevent predatory sales tactics. Some Michigan puppy stores offer high interest rate loan options or leases, where the puppies are held as collateral! Consumers can be easily misled by the financing language because the store employee did not understand the loan terms or wanted to make the sale by glossing over them. The loans include attractive low monthly payments, yet those payments are spread over years making the interest portion seem minimal (16). In addition to offering easy financing for high priced puppies, in June, The Humane Society of the United States petitioned the Federal Trade Commission to create a Trade Regulation Rule that would define the following acts at pet stores as unfair or deceptive (17):

HB 5917 prohibits local governments from enforcing or creating ordinances that would protect families and pets from irresponsible breeders and retail outlets. The market is not taking care of problem pet stores. After a hundred complaints, two lawsuits including twenty-four plaintiffs and regular news coverage exposing sick animals being sold, Petland Novi continues to sell puppies (18). Novi city council choose not to pass a retail ordinance addressing these chronic issues. Mt. Clemens, Utica and Grandville also choose not to pass proposed retail ordinances that would address the sale of puppies being sold at local puppy stores with illnesses. Only three Michigan cities, without existing puppy stores, have passed retail restrictions: Eastpointe, Fraser and New Baltimore. Therefore puppy stores are not be shut down due to local ordinances.

The bills undermine legislation passed last session. Rep. Mike McCready (R) updated Act 287 of 1969 just last session. New regulations went into effect January 2017. McCready’s bill was championed by the Michigan Humane Society and supported by the Michigan Veterinary Medical Association and the Michigan Association of Animal Control Officers. The Michigan Department of Agriculture provided supportive testimony.
The real problems lie at the commercial kennels and happen long before the puppies arrive in the stores. Poor breeding practices and lack of veterinary care are two of the biggest problems that are not easily fixed with more state regulations. Unless all breeders make huge investments and agree to higher standards, some kennels will simply be used as “showcase” kennels while the pet stores continue to source from sub-standard breeders.

Michigan pet store owners, local law enforcement and the MDARD have no control or oversight of USDA commercial breeders --the only way to protect families to end the puppy mill pipeline to our communities.

Please do not support these bills which would overturn all the progress we have made to protect families and pets from the cruel pet trade.

(15)     Missing vaccinations at The Barking Boutique. Warning letter sent, yet the store continues to import without required vaccinations

The Family Puppy’s breeders had serious direct violations to the Animal Welfare Act.
1) Marlin Bontrager, from , was The Family Puppy’s top supplier of puppies. According to a federal inspection, Bontrager was caging 177 adult dogs and had two serious direct violations including not seeking veterinary care for a sick puppy. Suffering was prolonged by not taking the puppy to the veterinarian. In addition, the inspector also cited Bontrager for housing dogs in temperatures in the 90’s. Dogs were observed heavily panting and puppies were stretched out on the wire floor trying to stay cool.  Bontrager has a history of violations going back to 2008 related to housing, shelter, primary enclosures, cleanliness, feeding and vet care.

2) Devon Schrock, another of The Family Puppy’s breeders, was cited for accumulations of grime and hair in the primary enclosures. This harbors diseases. In addition, Schrock’s drainage system was cited as the upper washdown was draining into a pen on the bottom where two dogs were exposed. There was hair and sludge accumulating.

Many of The Barking Boutique’s suppliers have violated the Animal Welfare Act.
One breeder with violations, Shady Oak Frenchies owned by Jonathan Detweiler (), housed 177 dogs in 2014 and was not disclosed on the store’s website.

The Barking Boutique owner stated he only works with breeders with no violations in the last two years – which is the new requirement outlined in HB 5916 -- yet breeder David Nisley () was cited for a direct violation of the Animal Welfare Act in 2016.