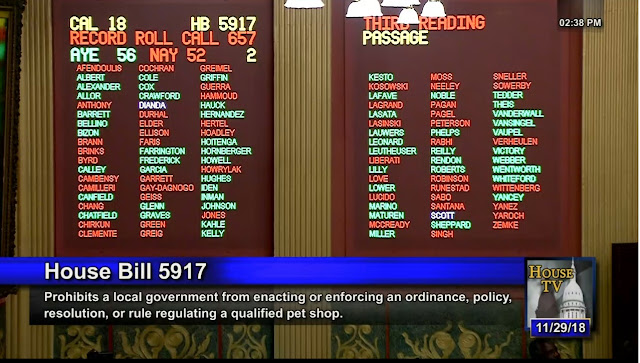 The controversial “Petland Bills” narrowly passed the house (HB5917 56 Aye, 52 Nay) yesterday and will move on to the senate for a committee hearing and senate vote. The republican sponsored bill needed 56 votes to pass.

Two democrats did not vote and two others voted 'yes' for unknown reasons.

Rep. Tedder (Clarkston) who had voted “no” in caucus voted “no” until all the votes were in and then changed is vote at the last minute to “yes” knowing the republicans needed 56 to pass and there were two votes pending.

Prior this year over 15 republicans were opposing the bill privately in caucus. Some provided us firm “No” votes and held to that position. While five republican’s who said they were voting “no”, changed their minds.

We need to reach out to ALL the representatives that voted no and thank them.  Find you rep here.

Special thanks to everyone that reached out to key representatives and those that issued action alerts. This was not an easy win for the pet stores.

We were very fortunate to have republican’s willing to not vote party lines for the animals. A special thanks to Rep. Mike McCready for helping to lead the way. Here is the list of republicans who opposed HB5917 yesterday. Please reach out and thank them.