Here is our press release for our Utica Pet Supply Campaign Launch:

An animal advocacy group has sent letters to the owners of Utica Pet Supply located at 45460 Van Dyke Avenue, asking them to stop selling puppies that come from puppy mills and instead to feature only rescued and adoptable dogs in their store. 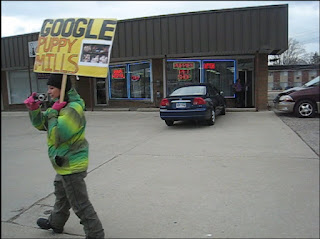 Pam Sordyl, director of Puppy Mill Awareness of Southeast Michigan, said “We hope that Utica Pet Supply will join the ranks of so many other pet supply stores across the nation and adopt a policy to help stop pet overpopulation.”
Sordyl sent a formal invitation to Utica Pet Supply to stop selling puppies and to take the Puppy Friendly Pet Store pledge through the Humane Society of the United States (HSUS) initiative, along with an offer to support the store during its transition to adoption events only. Utica Pet Supply has yet to respond to the group’s requests.
“We hope the store will take our request seriously,” said Sordyl. “We've worked with over 100 pet supply stores to sign them onto the Puppy Friendly Pet Store pledge. Unfortunately, some other stores have been reluctant to do so, and we then enacted a public campaign to educate the public about the stores’ puppy mill suppliers.” Six area stores that sell puppies have closed after such campaigns were launched.
Utica Pet Supply has a history of working with large out-of-state commercial breeders. Happy Tails Kennels in supplied puppies from 2003-2006. The Detroit Free Press exposed this puppy mill connection and listed Utica Pet Supply as one of the top importers of puppies in .
Puppy Mill Awareness’s investigation revealed the store has continued to work with large out-of-state breeders in , and . One such breeder—Canterbury Tails Pets, LLC, —shipped 15 puppies to Utica Pet Supply for the 2011 holiday season. United States Department of Agriculture (USDA) inspection reports show that Canterbury Tails Pets was cited for serious violations of the Animal Welfare Act related to lack of veterinary care. One violation report read, “White Lhasa has pink flesh protrusions from the 3rd eyelids of both eyes. This dog has thick creamy discharge and cloudy corneas of both eyes.  Eye conditions such as these can cause pain and loss of vision”. Another dog was reported to have a laceration on the right shoulder two inches in length with fresh blood.  Canterbury Tails Pets inventory reports show they kennel between 370 – 450 adult dogs.
Another breeder who has shipped puppies to Utica Pet Supply, Brian Sterrenberg of , was inspected by the USDA in January 2010. The investigator found that the outside runs were full of ice, snow and fecal material. “Had a bad snow storm 1 week ago and runs should have been cleaned by now”. This affected 95 animals.
“This is disgusting and sad” said Sordyl. “ families care about their pets, while Utica Pet Supply continues to work with breeders who are mistreating their animals.”
Currently, the Better Business Bureau is also giving this store a failing grade -- Rated F.
Puppy Mill Awareness of Southeast Michigan sent an additional letter to Utica Pet Supply this week, saying that if the store does not opt to end its puppy mill connection, the group plans to conduct a public education campaign outside the store. The letter ends with the request, “We would like you to pledge in writing to convert to a humane business model.”