The closing of Pet Station was long over due. We have been tracking sick dog cases back to 2005. Not only did they sell puppies, but a wide range of other live animals that were also suffering in the store. Pet Station was indeed one of the worst pet stores in . I will be publishing our findings soon. 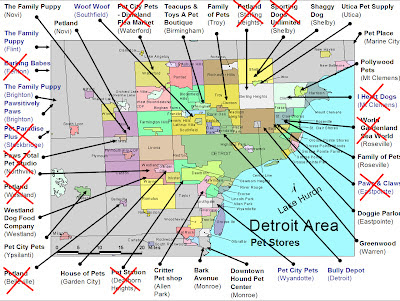 
May 2010: Pet Paradise Plus, Stockbridge Mi, closed by Animal Control.

We hope the remaining puppy selling stores choose to stop selling puppy and hold adoption events only.
Posted by Pam Sordyl at 5:29 AM