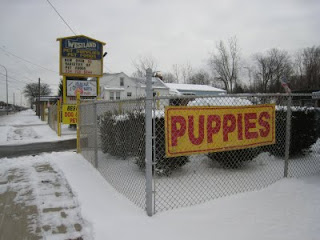 We send sent letters to the owners of Westland Dog Food Co. located at 37687 Ford Rd., asking them to stop selling puppies that come from puppy mills and instead to feature only rescued and adoptable dogs in their store.
We hope that Westland Dog Food Co. will join the ranks of so many other pet supply stores across the nation and adopt a policy to help stop pet overpopulation.
A formal invitation was sent to Westland Dog Food Co. to stop selling puppies and to take the Puppy Friendly Pet Store pledge through the Humane Society of the United States (HSUS) initiative, along with an offer to support the store during its transition to adoption events only. Westland Dog Food Co. has yet to respond to the group’s requests.
We hope the store will take our request seriousl. We've worked with over 100 Michigan pet supply stores to sign them onto the Puppy Friendly Pet Store pledge. Unfortunately, some other stores have been reluctant to do so, and we then enacted a public campaign to educate the public about the stores’ puppy mill suppliers. Six area stores that sell puppies have closed after such campaigns were launched.
Our investigation of Westland Dog Food Co. shows the puppy store has primarily worked with Missouri breeders and brokers going back to 2001. One such breeder—MAM Kennels in Lamar, Missouri—was featured in an HSUS investigation and was included in their “Missouri’s Dirty Dozen” list. United States Department of Agriculture (USDA) inspection reports show that MAM Kennels was cited for repeated violations of the Animal Welfare Act related to severe overcrowding, lack of shelter or bedding, dogs without the minimum space required, and no veterinary care for two years. One violation report read, “There are 2 dogs - a yellow lab in pen #6 and a rottweiler in pen #64 that have injuries and need to be see by a Veterinarian. The lab is limping on the left front paw. The rottweiler is walking with a humpbacked gait and is very thin. Both of these animals must be seen by a veterinarian to access their medical condition.”

Another breeder who shipped puppies to Westland Dog Food Co. in 2011, David Remey of Boonville, Arkansas, was inspected by the USDA in December 2010. The investigator found that the outside runs of the dog enclosures had a build-up of animal waste. There were areas of the enclosure where the animals could not move freely without coming into contact with feces.
This is disgusting. Michigan families care about their pets, while Westland Dog Food Co. has a history of working with out-of-state breeders who are mistreating their animals.
Over the years, Westland Dog Food Co. has worked with over 40 different out-of-state breeders and brokers, some of whom have also supplied puppies to Petland Novi. Those breeders’ kennel inventories range from 21 to 482 adult dogs.
The Michigan Department of Agriculture launched an investigation of Westland Dog Food Co.’s health certificates after finding that 44 % of its puppies were being imported illegally into the state. From June 2009 to December 2010, 25 of the puppies’ health certificates were rejected for not having the vaccinations required for import into Michigan.
An additional letter was sent to Westland Dog Food Co. this week, saying that if the store does not opt to end its puppy mill connection, the group plans to conduct a public education campaign outside the store. The letter ends with the request, “We would like you to pledge in writing to convert to a humane business model."
September 17, 2011 will mark Puppy Mill Awareness of Southeast Michigan’s 4th Annual Puppy Mill Awareness Day event. Each year we focus our public education efforts on a store that works with large commercial dog breeders. This year, if this store does not decide to adopt a more humane business model, we may be doing such a campaign on Ford Road in Westland.
Posted by Pam Sordyl at 12:36 PM