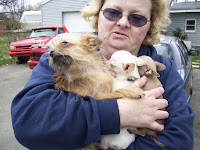 Does everyone remember the Laura Springborn case from last spring? One of the headlines read “ Gregory Woman Charged With Animal Cruelty Turns Herself In”. Springborn opened Pet Paradise Plus store stocked with puppies in Stockbridge, Mi in 2010. It was soon surrounded by protesters and eventually raided by the Ingham County ACO in May 2010. An investigation led them to her home in Gregory (Livingston County). In her home, they found over twenty small breed dogs in unsanitary conditions. She soon faced felony charges.

Unsanitary conditions should have been written as “shockingly” unsanitary. I thought you all might want to see just went on behind the pet store’s displays.

Springborn was no stranger to local Animal Control. There were many complaints filed regarding her dogs housed in Gregory going back to 2006.

1.13 dogs, Newf, St. Bernards, Great Pyren. And St. B puppies. No shade, skinny, not good living conditions.
2. No dog licenses.
3. Running at large, attacking neighbors dog.
4.Animal abuse: Shade, food and water?
5. Abuse. Too many dogs. Over 10. Breeding dogs, not caring for them. Hearing horrible yelps and crying from home.

On April 9, 2010, Animal Control removed a total of 24 dogs/puppies from her property. Inside the home they observed several dogs, garbage, and fecal matter covering the entire floor of every room in the home. There was smeared fecal matter throughout the home, some spots were several inches thick. The ammonia smell was overwhelming causing eyes to burn. No food or water was observed. What food was available was mixed with urine and stool. Springborn was informed for the sake of the dogs they could not stay and they would be removed immediately. Some dogs were locked in the back room which they came back later for. When they returned for them, the floors had been scraped from some fecal matter. When they opened the locked doors to the bedrooms, the dogs began running out into the living room and kitchen scavenging for food.

While the Livingston County ACO was rescuing the breeding dogs from Springborns home, the Ingham County ACO was finishing up their lengthy report involving her pet store. They had numerous complaints over poor conditions of the facility and gravely ill puppies. Fourteen dogs were removed from the pet store, two had parvo and later died.

There was a Health Certificate for a female St. Bernard in July of 2009 from Dr. John Hermann. This mobile vet seems to work with all the shady pet stores. The address for Pet Paradise on the certificate showed 15525 Racho Road, Taylor Mi with a Jackson phone number (517-795-4126). This is the Gibraltar Trade Center address in Taylor. It appears she moved from the Trade Center to Gregory.

At the Springborn home:
None of the dogs were licensed.
There was not a sufficient amount of food available to the dogs.
There was not adequate water provided
The interior of the home was caked with fecal matter and urine some areas contained several inches of accumulated stool.
There were at least five space heaters on the floor in various rooms and the dogs were running into them. One had appeared to be burned on its rear quarters.
Laura claimed two days ago she had bought two 8 week old Chihuahua puppies from Ohio. She could not find the health certificate required by law.
Laura could not provide any proof of vet care for any of the 24 dogs in her home.
Many of the dogs were coated with fecal matter.
Many dogs had visible lesions and inflamed eyes.
Some of the dogs observed being bred repeatedly.
There were large amounts of mouse excrement observed in all r ooms.
Many of the windows had been covered in spray paint.
There were feces covered clothing and sheets scattered throughout the home.

The Livingston County prosecutor ensured that Springborn would not be allowed to have animals during her two year probation. The Ingham County prosecutor was able to get some jail time, community service and much needed counseling. She was sentence to 6 months probation on 7/26/11.