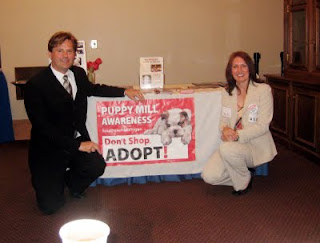 A "Pet Lemon Law" has been introduced in Michigan to offer consumer protections for purchasers of dogs, cats and ferrets. Under S.B. 574, people who purchase sick or diseased animals from pet shops, breeders or dealers would have specific recourse against the sellers.

Puppy Mill Awareness of Southeast Michigan applauds Sen. Steve Bieda (D-Warren) for leading S.B. 574, which would offer options for the purchaser, including returning the animal for a full refund and replacement or recovery of veterinary expenses. The bill includes specific time frames for reporting illnesses, maximum amounts a buyer can recover, and provisions for congenital defects in the purchased animals.

"This will hold pet sellers accountable for burdening the public with veterinary costs and emotional stress of caring for a sick pet," said Pam Sordyl, founder of Puppy Mill Awareness. "We commend Senator Bieda for addressing this costly problem, and for protecting the additional victims of the pet trade: consumers."

Liz Frates, of Ann Arbor, told Puppy Mill Awareness that she purchased a 16-week-old Yorkshire Terrier from a Michigan breeder for $1,200 in cash last year. She was told that the puppy was healthy. The breeder’s full written pet guarantee against anything congenital or hereditary did not help Liz in court, after the puppy was diagnosed with grade 2 luxating patellas in both legs – a congenital defect requiring surgery totaling nearly $3,200. Liz had already spent $900 in veterinary costs addressing breathing and diarrhea problems that the puppy had endured since his purchase.

“Without laws in place irresponsible breeders have free reign to find loop holes and continue with their unethical practices.” said Frates. “Pet insurance will not cover hereditary, genetic or congenital defects and most people cannot afford the thousands of dollars in vet bills and surgeries to correct such health problems.”
In Michigan, consumers often rely on the Better Business Bureau to settle disputes with pet stores. Other times they end up in small claims court, which places a heavy burden on the purchaser to prove that the seller was aware of a pre-existing condition in the purchased animal.
Puppy Mill Awareness has been logging sick dog complaints in Michigan for three years. “Cases often go unreported to proper authorities. Buyers may complain to the pet store or breeder, only to have their calls unreturned,” said Sordyl. “We advocate for consumers by providing counseling and a checklist including agencies who may respond to complaints.” That checklist can be found here: http://files.meetup.com/1258100/SickPuppyChecklistv8.doc
Puppy Mill Awareness started a petition in support of Michigan's Pet Lemon Law on Change.org, the world's fastest growing platform for social change. By signing the petition, citizens can let their representatives know that they support the law, too. The petition can be found here: http://www.change.org/petitions/the-mi-state-senate-pass-lemon-law-to-protect-michigan-pet-buyers
Puppy Mill Awareness would like to thank Sen. Bieda and the bill co-sponsors for both protecting Michigan consumers and shining the spotlight on the puppy mill/pet store connection.
According to the nonprofit humane education group The Citizens Against Puppy Mills:
http://www.citizensagainstpuppymills.org/pics.php
• Nearly 100% of all puppies in pet stores have parasites when they are purchased.
• 48% of puppies being sold in pet stores were ill or incubating an illness at the time of purchase, according to a recent California study.
• 500,000 puppies are born in puppy mills and sold in pet stores every year in the United States.
• Commercial breeders can make more than $300,000 selling puppies every year.
• Almost every puppy sold in a pet store has a mother who will spend her entire life in a tiny cage, never being petted, never being walked, never being treated like a dog.
• Female dogs are usually bred two times each year. At that rate, they usually burn out by the age of five, at which time they are put to death
The Puppy Mill Awareness Meetup of Southeast Michigan is working to end the mass production of dogs in commercial kennels ("puppy mills"). Our mission is to educate the public about the cruel cycle of commercial dog breeding and the pet store link. Read more about our goals, success stories, activities and studies at http://www.meetup.com/puppymillawareness/about/
###
Posted by Pam Sordyl at 7:07 AM