Holding out for Buster (Short Film) 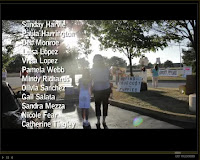 Puppy Mill Awareness was thrilled to be apart the PAHFest this year! Many of our Petland Campaign team members participated as extras in "Holding out for Buster" a short film highlighting our Petland protest!

In the film, a little girl is pining over her long-lost dog, and her comedic mother tries to make her child happy (in her own way). They become more educated while going down the path to add a new dog to their family and end up with a surprise.

We are shown proudly holding signs at Twelve Oaks Mall. The film also includes Kevin Hatman from the Michigan Humane Society, Susanne Dooley-Hash from Horse Haven and Ed Sereky from the Dearborn Animal Shelter – all with important messages about animals in need.

Buster and the white pitbull puppy were both adopted by Barb Baker at Horses Haven. The puppy was blind and found discarded in a garbage can.