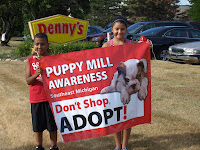 Guardian Angle Animal Rescue (GAAR), home-based in Livonia, is committed to participating in peaceful demonstrations at the Twelve Oaks Mall – home to Petland. Sandra Mezza, the rescues founder and president, has been rounding up nearly 20 volunteers each month including many youths who are learning to stand up for a cause for the first time. They make their own signs and wave on passer-bys.
This week, Sandra’s volunteers stood in as extras at a large demonstration filmed as part of a PAH-Fest documentary. Suzette Dexter, another local dog advocate won a contest to create a short documentary about animal welfare. She choose puppy mills as one of several issues to be addressed in the 6-minute film.
Both Puppy Mill Awareness and GAAR will be attending the film screening this Sunday hoping the documentary makes it to the big screen!
Learn more about PAH-Fest
Learn More about Guardian Angel Animal Rescue: 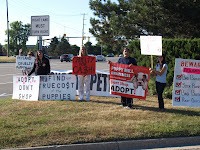