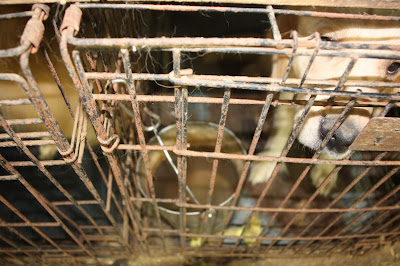 Only 15 tickets issued in a three-year period,
most not prosecuted

Citing multiple case studies, the report detailed a systematic lack of initiative across the 43 municipalities within the department’s jurisdiction, particularly when dealing with retail and kennel facilities. Of the 429 animal cruelty complaints called into the OCAC dispatch office over the three-year period, only 15 resulted in any type of ticketing. 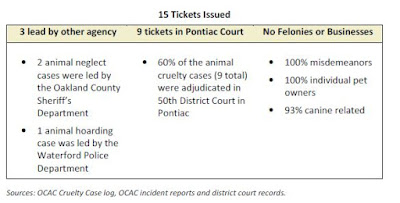 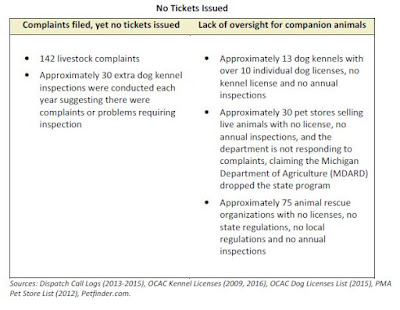 The report called for the department to develop policies and procedures for officers and dispatchers, write contracts that outline the departments scope of work, and begin to enforce existing anti-cruelty laws by ticketing and prosecuting animal abusers.

Since the report was issued to the department in October 2017, additional case studies of neglect have been escalated to senior management and eventually featured in the news, yet the department continues to avoid enforcing the basic cruelty laws.

(Novi, 2018) Three lawsuits were filed against Petland (Novi) including twenty-five plaintiffs for multiple violations of the Consumer Protection Act. Puppies were sold with genetic defects, infections and some had highly contagious diseases, costing the plaintiffs thousands of dollars in veterinary care. One man was man hospitalized after purchasing a puppy infected with Campylobacter. No action taken by Oakland County Animal Control. Puppy buyers are referred to the Michigan Department of Agriculture which no longer regulates pet stores.


(Clarkston, April 2018) Concerned family members documented deplorable and unsafe living conditions at the home of their elderly parents, Ann and Richard Glenn. Over 60 photos and videos were provided to Oakland County Animal Control confirming the show dog breeder had spiraled out of control. Of the 42 small breed dogs, two dogs were at various stages of lethargy; other dogs had urine stains, matting, eye infections, skin rashes and gum disease. With regular oversight and enforcement, these animals could have avoided these conditions. The county avoided significant expenses for investigation, evidence gathering, animal care, and court proceedings, by claiming the complaint was unfounded.


(Oxford, January 2019) Livonia Animal Control seized ill puppies from an online retail seller, Kimberly Ann Kalec in September 2018. To avoid oversight while on probation, Kalec and her partner Stephen Andrew Kalec moved to Oxford and continued their puppy selling business. Oakland County Animal Control attempted to conduct an animal welfare check after a German Shepherd puppy was sold will medical issues. With no one home, the inspection was scheduled the next day with the puppy sellers. The OCAC report read “All puppies appeared to be very playful and a couple were vocal. The puppies all appeared clean, healthy, and active.” Case closed. The purchased puppy was diagnosed with Giardia, was anemic and had low proteins. It is unclear where the puppies were obtained and if they had proper importation records. The OCAC report did not indicate that the officer spoke with the retailer’s veterinarian or if all the puppies had 30-day health certificates signed by a veterinarian.

If you purchased a puppy from a pet store, online seller or breeder with illnesses, please contact Puppy Mill Awareness of SE Michigan at 734-718-7100.