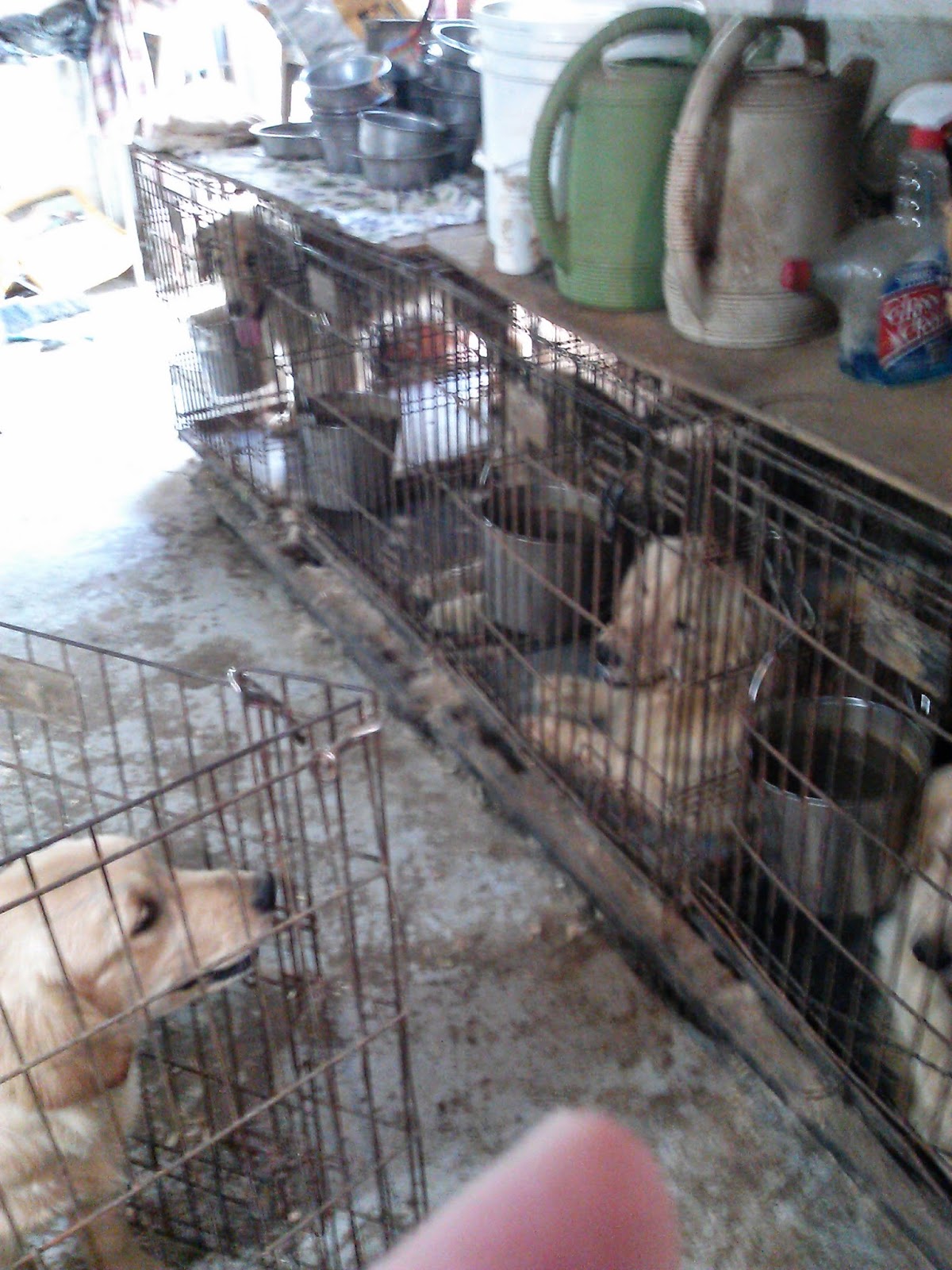 Farmington Hills, Mich. – Puppy Mill Awareness of Southeast Michigan is taking part in the Humane Society of the United States’ (HSUS) eighth annual “Puppy Mill Action Week” by releasing photos from a Michigan dog breeding facility listed in an annual report of 100 of the nation’s problem puppy mills. Chien d'Or Kennel, a.k.a. “Gabriel’s Ark Kennel,” located in Farmington Hills, is featured in the report “101 Puppy Mills: A Sampling of Problem Puppy Mills in the United States,” released yesterday by The HSUS.

The operator of the kennel, Mary Kathryn Gabriel, breeds AKC-registered golden retrievers and sells puppies online directly to the public. Photographs taken during Oakland County Animal Control inspections in 2013 show dogs with patches of missing fur and confined to small, rusty cages, enduring dirty conditions and overcrowding. The kennel has failed many county inspections since 2008 and has been the subject of numerous complaints from buyers of the kennel’s puppies.

Pam Sordyl of Puppy Mill Awareness, who has gathered extensive documentation from public records, reports by visitors to the kennel, and dog buyers, stated, “Ms. Gabriel is a chronic offender with repeat violations of the Michigan Department of Agriculture and Rural Development’s ‘Regulation 129’governing standard for dog kennels. The deplorable conditions of the kennels seem to have directly impacted the dogs’ health and may have even violated Michigan’s animal cruelty laws.”

Gabriel has been primarily breeding and showing AKC golden retrievers since 1999 and advertises them on her website www.chiendorgoldens.com.

Inspection reports by Oakland County Animal Control officers detail shocking conditions and include recommendations for removal of the animals. “The dogs standing had a mere few inches from the top of the cages,” wrote officer Sgt. Brzezinski in a report. “The cages themselves were caked with dirt, filth, rust and animal waste. Several of the dogs were itching, and biting themselves nonstop which is consistent with a flea infestation. The water buckets, clipped to the cages…also included dirt, hair and grime. It was difficult to breath from the smell and cloud of flies in the room.”

To address the problems associated with large-scale dog breeders in Michigan, Senator Steve Bieda (D-Warren) and Senator Rick Jones (R-Grand Ledge) have introduced the “Breeder Registration Bill,” S.B. 560. Once registered, dog breeders with 15 or more animals would be required to meet minimum care standards and guidelines for the care of their animals. Concerned Michigan citizens are encouraged to call or send letters to their legislators to support S.B. 560, which the bill’s authors hope will receive a hearing this spring.

To see the HSUS’s 2014 report “101 Puppy Mills: A Sampling of Problem Puppy Mills in the United States,” visit www.humanesociety.org/101PuppyMills.