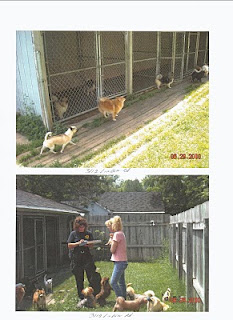 On June 8th,2010, Cherie Lane of My Puppy Paradise sold a very ill Pomeranian puppy. It was reported that the puppies from that litter looked lethargic. The pom was later diagnosed with parvo – a deadly virus. The township was notified of the situation and investigated the facility.

On June 29th, local Animal Control found over 50 dogs on the property. Cherie Lane was ticketed for not having them licensed. This meant that they likely did not have their rabies vacations. Vet information was not provided. The Zoning Officer cited her for having more than 3 dogs violating the township ordinance.

In July, Cherie not only lost her small claims court case over the parvo puppy, but she was evicted from the rental property in Mt. Morris Township.

On Monday July 26th, Cherie Lane, paid her $300 to the Mt. Morris Township Zoning Board which would allow her to seek approval to keep more than 3 dogs. The Township notified the neighbors who showed up for the review meeting on August 12th. We had already reached most of them with our petition. 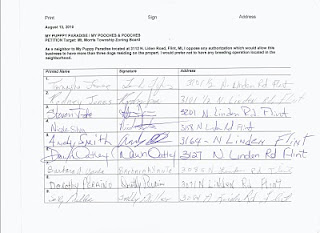 Just after paying her fine, she was evicted by the rental property owners: Claudine & Wilson Desilva for not paying her rent. This meant she no longer needed to speak with the board. We took the opportunity to let the board know that the neighbors did not want dogs left out in kennels for breeding. We have asked the property owners to ban pets from the kennel for a year to protect them from the virus still on the property.

On August 7th, the kennel operation moved out in a hurry leaving the house filled with debris, filth and property damage. 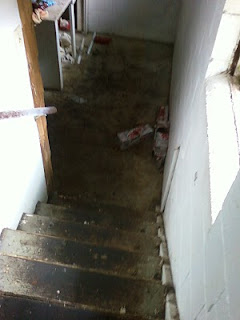 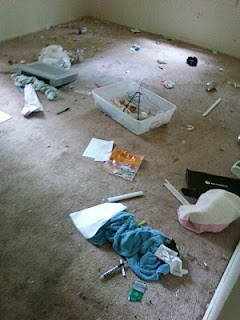 On August 16th, the Zoning Board heard several neighbors concerns regarding the welfare of the animals housed in this kennel. They were concerned about the cleanliness, leaving them out at night subject to weather conditions and the smell. One neighbor was worried about how many times the dogs are bred and did they have air conditioning. The Board also received a letter from the commercial property owners across the street opposing the request. On top of our petition the board made the right decision.

Her motion was denied.

Going forward the owners or renters of this kennel will have to plea their case to the Zoning Board.