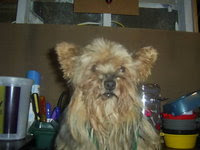 Last night the St. Clair County Commissioner Bohm, stated “Less is more” when it comes to the Dog Kennel Ordinance. Was he speaking for all the Commissioners? Who would ever think less could possibly be more when there are large commercial breeding operations churning out puppies for profit in their backyards. The county needs standards that are enforceable.

St. Clair County has 7 kennels allowed to have over 50 dogs. There is one USDA breeder with 122 dogs!

The easiest standard to enforce is a limit on the number of dogs. Commissioner Simasko again stated that there was no need for a cap and a kennel can have as many dogs as they want, as long as they are cared for.

No cap equals an invitation for puppy millers.

Were the breeders and Commissioners really proud of the way this ordinance was developed? It was introduced on May 12th with no public publication. Little input was collected at the meeting and one Commissioner, Simasko, filtered all comments. All work completed at prior workshops starting in January was simply left out. If you were not there on May 12th prepared with your input, it was left out.

After careful review of this new ordinance that was templated from Jackson County and proposed by a breeder, there are some major oversights. Has anyone really read it? First, there is a Grandfather clause, meaning, the existing 38 breeding kennels will not have to adopt it. Since there is no current ordinance officially published or adopted, what will they follow? It would be easier if all kennel followed the same ordinance. Give the existing kennels a year to comply.

Second, they were no kennel inspections mentioned. After this was pointed out, Simasko did add annual inspections.

Is this ordinance ready for approval? Too many major oversights. Not to mention the 30 plus items left out from the workshops prior to Simasko taking the project over.

I spoke up for the dogs and left a book filled with rescued dogs from their mills along with the PD Kennel USDA inspection report showing repeated violations. The next questions are going to point to the Animal Control Inspectors. How are these kennels passing?

The ordinance still needs to have full board approval. St. Clair County dog lovers need to contact their Commissioners to ensure breeding dogs are protected.