A Study of Michigan's Puppy Pipeline 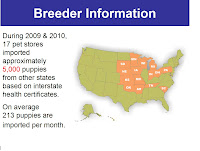 The Puppy Mill Awareness Meetup of Southeast Michigan has completed a study of puppy-selling pet stores in Michigan. The primary goal of the study was to determine breeder information to help protect conscientious customers from unknowingly contributing to animal neglect and abuse in distant states.
Michigan Puppy-selling Pet Shop Study
Summary of the findings:
There are approximately 50 puppy-selling pet stores in Michigan.
Over half of the stores are located in the southeast Michigan. Wayne County has the most puppy-selling stores (10) followed by Macomb County (8).

From 2009 to 2010, 17 pet stores imported approximately 5,000 puppies from other states according to interstate health certificates. On average 213 puppies are legally imported per month to pet stores.

The Family Puppy/Family of Pets store is the largest chain, with five stores in the southeast Michigan area importing on average 118 puppies per month. V.I.P Pets is the second largest chain with four stores in west Michigan.

A puppy may travel 1,200 miles before reaching a Detroit area pet store. Transportation from distant states causes stress in dogs and increases the risk of disease transmission.

Many stores are operating without a prior pet store license.

A variety of puppy peddling operations have increased with the lack of regulation. As families are losing their jobs they may be turning to the pet trade as an easy way to make extra money without experience or knowledge of canines, disease control or breeding standards.
These other forms of puppy-peddling were discovered:
• Puppy Garage Sales
• Pitbull-selling Pet Stores
• Dog Flippers
• Rescues operating as pet stores
• Trade Center booths
Posted by Pam Sordyl at 7:27 AM