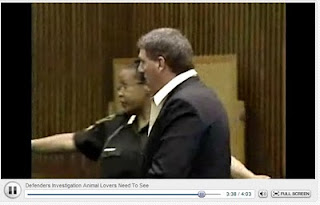 On October 28th, 2010 my clients (the dogs) won again! Joe Yaquinto was sentenced to 20 months in prison without bond. With our letters and attendance at the hearing, Judge Talon did not hesitate to restrict Joe from working with animals on parole!

Dani, who purchased two sick puppies from Joe, testified she found Joe through an advertisement on Petfinder.com. She had a business card for Sporting Dogs Unlimited that matched Exhibit 1 – a website photo. They played a recording of her conversation with Joe where he states he is no longer on Petfinder, but now using Hoobly, Kijii/Ebay, Adopt A Pet and a lot of other sites. He also told her he was still interested in her designing him a new website. Dani did a great job on cross examination, we are very proud of her for representing the other 11 victims who have reported purchasing sick dogs. He tired to suggest Becky Miller owned the entire operation and that Joe did not know how to use a computer. Dani stated she and Joe looked up a dog at a shelter and he was operating the browser etc. 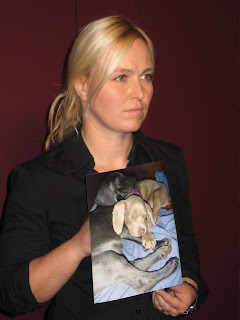 Joe also testified. He stated that Becky Miller worked with him and was the owner of the entire operation. She allowed him to board his dogs there. She did not make the website, rather a lot of volunteers helped him post pictures. He named Ashley Gardner. Stated he and his volunteers went to shelters to pick up dogs, sometimes they were rescued from divorce and foreclosure situations. He would take them to the vet and get them all vaccinated, neutered and spayed. He never adopted out an unaltered dog unless they were under 6 months of age. He was not aware of any complaints. He mentioned a rescue broke his window in his truck but he did not report it. He received anonymous calls to his house. He said that Dani offered to make the website for $600 but he felt it was too high and said no. Later, on tape the Judge relistened to the part where Joe said, yes, he wanted the website.

Joe claimed his site did not have dogs listed for adoption. It had his name and number. The attorney asked him if he was just posting this for funzies? Why would he have this out there if he was not adopting out dogs? This story wasn’t adding up. He stated he has sold hundreds of dogs. When asked who posted, he said Ashley Gardner. They were not removed because no one had the pass code…she lost it. He did ask her to remove them 5 months ago. He did not report this to his Probation Officer. The Judged asked him how did he posted cars for sale when he owned the dealership? He said his admin did it for him and he doesn’t know a thing about how to use a computer.

Joe started his career as a dog flipper back in 2006. He told the judge he picked up dogs off the street in Detroit -only the ones running loose in the city. He gave them away for free after seeing a vet. The Judge asked him how he financed this? He said his volunteers pitched in on gas and the vet gave him a great deal $49 per dog. Cheap.

According to Joe, Sporting Dogs Unlimited began in 2006 made of up all volunteers (note some were paid wages in cash). He was helping Becky out by cleaning the floors with bleach, bathing dogs..etc. This is when she offered him space in her boarding kennel. Some dogs were sold for profit to offset the cost of the ones for free. When the Judge asked him was there financial benefit, he said it is an absolute looser (referring to rescuing dogs).

He sated that he never threatened anyone over the phone and did not impersonate a police officer. The judge wanted to listen to the audio tape again showing that Joe agreed to have Dani set up a website.

A print screen of another page of his website showing an email address and a phone number belonging to Joe was submitted as evidence. 248-249-3544 and sportingdogs15.com.

So the arguments against him were as follows:
Failed to pay restitution in a timely manor.
Was in a position of trust at Sporting Dogs Unlimited -Manager.
Contract showing his signature and phone number.
Business Card and website.
He was operating a website and had knowledge of it.
Admitted on audio tape that he wanted Dani to create a website for him.

The Judge stated the rules of evidence don’t apply to this hearing. He is most concerned about Joe being in a position of trust and having a website. He referenced notes from Judge Sullivan who clearly felt Joe should not be in a position of trust. It is now a credibility issue. Being 57 years old and a prosecutor for 25 years he has lots of experience working with people. In this case he relies on his personal experience and common sense. He has been lied to by witnesses all the time.

“Frankly, I don’t believe you! You hide behind a curtain that others are behind this despite it was your number. Whether you set them up yourself is not he issue. I find the people have proven more than 50%. Even your own testimony put you in a position of trust. I am not making any decisions related to the puppies sold. Finding you directly on the use of the internet, in this business endeavor you were involved in.” – Judge Talon

“You have an excuse for everything and only if it is a positive nature and I don’t’ believe you” – Judge Talon.

“You are in violation of probation. Order judgement of guilty” – Judge Talon.

Probation guidelines were 5-23 months in prison. After adding up all of his points from 6 priors, the judge allowed Joe to speak again.

Joes criminal record goes back to 1978 with misdemeanors, but his real criminal history began in 1990.

“You feel the rules don’t apply to you” – Judge Talon.

“You are taking advantage of people and not learning your lesson. Judge Sullivan was trying to protect the public. You were in the position of trust that Judge Sullivan did not want you to be in. The court can be mad or afraid of you. We are clearly mad. This can be for punishment, to deter others or keep you form harming people or retribution. You have great people skills that make you a con man. Probation is not approved. It is time to be imprisoned” – Judge Talon

If you are interested in saving the dogs that were taken from Tail Waggin Fun on October 7th, some are now up for adoption at the Macomb County Animal Shelter. Many more will be posted soon (Total 19). Please cross post and help get them out of that place…it is very sad and they don’t look healthy.
Posted by Pam Sordyl at 4:37 AM